Claire was the first one off of the bus when they arrived at the Randolph Animal Rescue Shelter and Reserve. She took a deep, excited breath as she looked around. As far as she could see were magnificent trees and lush fields.
She’d done her research. She also knew there were African-like savannahs, rain forests and what she really came to see – a bamboo forest scattered with giant pandas.
It was a warm spring day and the land before her looked wild and free.
Julia was last off the bus.
“Isn’t it beautiful?” Claire said pointing to a grove in the distance. “Look! Bamboo! That’s where the pandas are.”
“Even I know that and all I came to do is get out of math,” Julia said laughing.
“You know they basically eat all day,” Claire added, ignoring her sister. Bamboo doesn’t really give them much nourishment, so they have to eat a lot of it. They have special stomachs to digest the wood.”
“Very good,” Mr. Potts said.
“You have a smart class Mr. Potts,” a voice we’d never heard before called as she almost skipped towards them.
Claire looked over at her teacher and the woman was now shaking his hand. The lady caught Claire’s eye and smiled.
Claire smiled back – thinking that the woman was probably about her cousin’s age – 25 tops.
“Class,” Mr. Potts said in his soft voice and the entire class gathered around him. “This is Emma. She is going to be our guide this morning.”
Emma smiled. “Good morning everyone and welcome to the Randolph Animal Rescue Shelter and Reserve – are you ready to see some animals?”

A chorus of yes and ready and yeas fell short of Emma’s expectations; because she asked the same question again – this time with more enthusiasm. “I said, are you ready to see some animals?”
“Yes!” the entire class shouted at once.
“That’s better. Much better,” Emma said. “We’ll start inside.”
“Does everyone have their notebooks and animal pages with them?” Mr. Pott’s asked.
Several kids ran back on the bus – including Julia. Claire laughed.
Julia and the others caught up with the group as they were entering a large green and tan building that sort of disappeared into the landscape.
“I wonder if they did that on purpose,” Claire whispered to Julia.
“What?” asked Julia – still breathing a little heavily from the run from the bus.
“The building. The colors. They sort of blend into the background. The place is huge and I didn’t see it until now.” Claire said.
“Excellent,” Emma smiled at Claire again. “I’m glad someone noticed and it was on purpose. Did everyone hear what…” Emma looked at Claire.
Claire looked down shyly and then looked up and said her name. “Claire.” It was only her class after all.
“Claire,” Emma repeated and Claire smiled at her, “said?” Emma paused. “The building is camouflaged to blend into the background so the animals really do think they are in the wild. The building is also coated with special animal musk to mask us humans roaming around.”
“Does it work?” Caleb Greene asked. Caleb was a smart student in Claire’s class, but he was also a know-it-all and his tone was sarcastic.
“We think so,” Emma said, ignoring the sarcasm, “they stay away – each species in the habitat that was created for them. We are home to endangered animals such as the grizzly bear, the mountain gorilla and the black rhinoceros, which is critically endangered. We are also home to animals on the vulnerable list.

Anybody know what that means?” Emma’s eyes twinkled as she looked around the room at the raised hands. She called on Claire.

“It means that they either used to be endangered and are healthier as a species because they are having more babies or that they are getting to be fewer and fewer of them so they might be endangered soon.”
“Exactly,” Emma said. “So the animals we have on the vulnerable list include the African bush elephant and the giant panda. We are very excited to say that we have 29 grizzly bears and 12 are scheduled to go back to the wild this year. And out of the 16 giant pandas here and three are going back to China by the end of the summer.”
“Isn’t that wonderful class?” Mr. Potts commented.  “That would be a good thing to put in those notebooks. And don’t forget – when we go on our safari – quick draws are great for your notebooks as well.”
“It’s as huge as Georgia in here,” Julia observed.
“Lots of animals require lots of space,” Emma answered
Caleb spoke without raising his hand. “I read that you have two South China Tigers and they’re going back too.”
“Unfortunately, Shama, our female is sick and the date for them to leave may be pushed back a little. They’re very important to us. No one really knows how many there are in the wild – some estimates say only 20. In reality, none have been seen in for over 15, 20 years.  Just 40 years ago there were over 4,000 in China; unfortunately, the government thought these smallest of all tigers were pests and hunted them to oblivion. We’re working with other shelters to breed them. The problem is, it’s estimated that all of the remaining tigers come from the same six wild tigers.”
“That’s bad,” Veronica Coolidge said. Claire liked Veronica. She was one of Julia’s best friends and played at their house a lot. She had long, long, long light brown hair and amber-red eyes.
“Really bad,” said Emma. “There might be nothing we can do about them.  This particular subspecies of tiger is, like I said small, and is actually believed to be the original tigers from which all of the other tigers came. It would be so cool if we can save them.”
“Can we see them?” Julia asked.
“Maybe,” Emma said. “The only for sure is a surprise – two baby grizzlies born four weeks ago. They’re still inside. We’ll see them for sure. The rest of the animals, 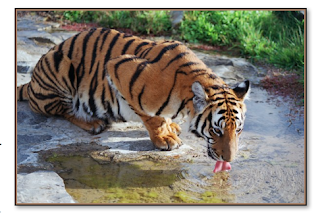 except for Shama and a few others of the critically ill, are in their habitats and we have to spot them. We’ll separate in jeeps. But first, we’re going to watch a movie about the shelter and all the animals living here.”

“Write Movie as the topic and I want two facts about each animal written directly from the movie,” Mr. Potts said.
The class was led ito a theater and Julia, Claire and Veronica hurried to sit in the front row – so did Caleb Greene. He leaned over to Claire.
“Nice giant panda facts,” he said – almost nicely.
Claire looked at him and sort of smiled. She didn’t say anything because she wasn’t sure he was being nice for 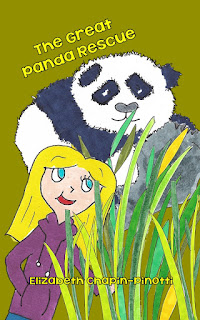 real or playing her. He teased her a lot and that bothered her as much as she liked the attention – only she didn’t tell anyone the last part.

Email ThisBlogThis!Share to TwitterShare to FacebookShare to Pinterest
Labels: The Great Panda Rescue